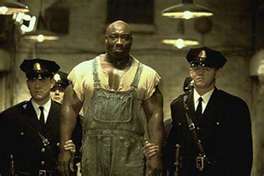 I was saddened last week to hear of the passing of Michael Clarke Duncan, the gentle giant who played John Coffey – “like the drink, only not spelt the same” – in my all-time favorite movie, The Green Mile. Stephen King, so renowned for horror and buckets of blood, penned a spiritual classic set on Death Row, and John Coffey plays a hulking and barely literate prisoner with the gift of healing.

Late in the story when, despite his obvious innocence, he’s about to sit down in Old Sparky and tilt off the edge of the world, Tom Hanks confesses to his wife: “I done a few things in my life that I’m not proud of, but this is the first time I ever felt really actually in danger of hell.” “What do you mean?” “I mean we’re fixing to kill a gift of God. One that never did ary harm to us, or to anyone else. What am I going to say if I end up standing in front of God the Father Almighty and He asks me to explain why I did it? That it was my job? My job?”

The film is also a thought-provoking point of discussion regarding the theology of hell itself. Sadistic guard Percy Wetmore sabotages the execution of Eduard Delacroix, causing him to slowly burn to death as the electric current surges through him. The torture scene runs a total of three minutes. So how do we, as Bible-trusting Christian students, understand how eternal flames can torture the lost forever?