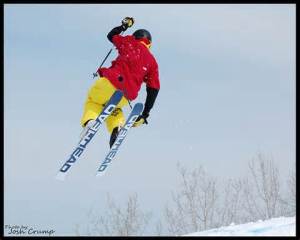 It was one of the gold-medal sweeps of all time. A good-looking California swimmer named Mark Spitz had disappointed his fans in 1968, coming out of Mexico City with one second-place prize, one third place, and one last place.

But now it was 1972, the Olympic Games were in Munich, Mark Spitz was four years older and four years wiser. And people began to wonder how many gold medals Spitz would take home out of his seven events.

Well, you’ve probably heard the story, and if you’re from that generation, maybe you’ve seen the poster. In the 100 meter – gold. In the 200, gold. In the 100-meter butterfly, gold. Two hundred meter butterfly, gold. And in three team events – the 400-meter freestyle relay, the 800-meter relay, and the 400-meter medley relay . . . Spitz and his American teammates draped three more gold medals around their necks. The Olympic orchestra got a lot of practice playing “The Star-Spangled Banner” as Mark Spitz went a smooth seven-for-seven, an achievement that stood until a newcomer in the swimming pool named Michael Phelps did him one better in Beijing six years ago.

But all this week as we figuratively travel to Sochi in search of spiritual truths from the 2014 Olympic Games, here’s the bit of trivia that’s worth noting. In all seven events, swimmer Mark Spitz set – or helped to set – a new world record. He accomplished things that had never been accomplished in a swimming pool before. No one had ever swum so fast . . . and somehow, with the prize of Olympic gold at stake, Spitz was able to reach deep inside and do greater things than anyone could have imagined.

And as the 118 years have ticked by since the very first modern Olympic Games held in Athens, we’ve seen the steady march of progress as athletes have consistently done better and better . . . and better than even the most hard-driving coach could have envisioned.

Back in 1896, a hometown hero named Spiridon Louis won a gold medal for the marathon race in a field of – get this – 25 runners. He spent the two nights before the race praying; the day before, he fasted! No carbo-loading, no Gatorade, no nothing. What would today’s trainers think?

A Colonel M. Papadiamantopoulos fired off the starting gun and Spiridon started out on the exact same course that the ancient runner, Pheidippides, allegedly took so many centuries before, carrying the news of the battle victory at Marathon all the way to Athens. But check out this finishing time: two hours, 58 minutes, and 50 seconds. Now, I confess to  being duly impressed; I foolishly staggered my way around the L.A. marathon course back in 1995 in a pathetic five hours, but today’s world-class runners have shaved almost an hour off Spiridon’s time. The current world record stands at a blistering 2:03:23 by Kenyan speedster Wilson Kipsang in the 2013 Berlin Marathon.

Here’s the point. There’s just no limit to greatness, no barrier that can’t be broken. Four-minute miles, once thought to be physiologically impossible, turned out to be entirely doable. Just ask Roger Bannister.  All those unbeatable swimming records? Mark Spitz shattered seven of them in one Olympic year. Climbing Everest? Not impossible after all. Thousands of people have now been to the world’s highest point, including Jordan Romero, a 13-year-old kid who lives just up the hill from me at Big Bear Lake.

Here’s what that means. If human beings can achieve such greatness through their own efforts, if athletes can push back the boundaries of world records just by sweating harder and waxing their bobsleds better and trying harder and maybe even crying harder, what does that tell us about what you and I can do for the Lord as He adds His power to our efforts?

I imagine every Christian snowboarder in Sochi has this promise pasted up in their locker. Philippians 4:13: “I can do ALL THINGS through Christ which strengtheneth me.”

Just a few pages earlier, where this same writer, Paul, is encouraging the believers in the city of Ephesus, he adds this thought: “Now to Him [Christ] who is able to do immeasurably more than all we ask or imagine, according to His power.” Then he adds this: “ . . . that is at work within us.”

Don’t you love that? I can hear Paul shouting out that cry of hope loud enough that we’d be able to hear it some 1900 years later. “With God at your side,” he says, “get ready to tear up the record books. Push back the boundaries. Expand your thinking! Prepare to rewrite history because God’s on the move!”

In so many Bible stories, people encountered situations where it seemed like there was an impassible barrier ahead. There was an Olympic record that just couldn’t be broken. Jesus and His disciples had to feed 5,000 people – and just had one tiny lunch. According to every law of math and calorie counting and every restauranteur’s handbook, that’s an impossible situation. But Jesus just looked up, said a prayer, blessed the food, and set an Olympic record people are still talking about today.

This same Jesus was hiking to make a sick call on a friend’s daughter. Halfway there, He received the news: “Don’t bother going any further; the little girl’s dead.” Well, you and I rush to a person’s bedside as long as they’re still breathing. Maybe there’s something we can do. But as soon as we hear they’re dead, we stop. We turn around and go home – because there’s a barrier human beings just can’t break. Death seems to us to be an unshatterable record; nobody can beat it. But Jesus just keeps on walking at the same pace and in the same direction. Because for Jesus getting to a house five minutes after someone dies isn’t any different than five minutes before. He can wake them up on either side of death! No problem! That Olympic record’s shattered; it’s history! In three short years on this planet, He completely rewrites the record books. “I have conquered death,” He shouts in triumph as He comes out of the tomb Himself.

In your own life God wants to take you to heights you never dreamed of. He wants to give you more victories than ever got listed in your high school yearbook. And it doesn’t matter what you are or who you are or what your ethnicity or gender is.

Did you know that women today, right now, in Sochi and in the recent London games, have been surpassing the top men’s marks of just a few decades ago? That’s right.

In 1924, Jackson Scholz, one of the fastest men alive, did the 200 meter in 21.60 seconds. How did Florence Griffith Joyner do in the ‘88 games in Seoul, Korea? 21.34 seconds, a record that still stands. Side by side, if we had a time machine handy, she’d beat Scholz and the whole male Olympic field of Paris hands down. Back in 1904, Meyer Prinstein gave the U.S. a gold medal in the long jump with a big St. Louis leap of 24 feet 1 inch – 7.34 meters. A Russian woman named Galina Chistyakova has sailed right past him, holding the mark at 7:52 meters. In the swimming pool, it’s the same thing. Back in 1960, Australian swimmer John Devitt brought the crowds in Rome to their feet with a time of 55.20 seconds in the 100-meter freestyle. As I write this, German swimmer Britta Steffen has submerged that mark clear down to a whopping 52.07.

So if your driver’s license has an “F” for female on it, don’t let that stop you. If you got bad grades in school, don’t say to yourself, “God can’t use me.” Some of the spiritual records others are setting here in the year 2014 might be yours to break in the year 2018 or even sooner. With our empowering Savior cheering in the stands, there’s no limit to what we can dream – or do.

I'm a math professor at San Bernardino Valley College - awesome place! - and author of adult Christian fiction. Lisa and I have two grown daughters and four grandkids.
View all posts by David B. Smith →
This entry was posted in Olympics, Sochi, Winter Sports, Women in Sports and tagged Sochi, Winter Olympics. Bookmark the permalink.