Theology at the Movies: Jerry Maguire 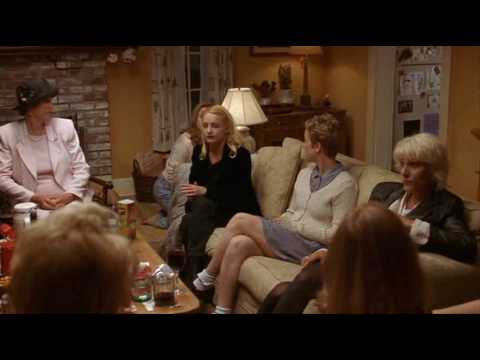 In his book, “A Man Named Dave,” Dave Pelzar points out this interesting reality: “When we forgive, we free ourselves from the bitter ties that bind us to the one who hurt us.” Have you ever pondered the irony of that? Here’s a person who has hurt you, wounded you. In terms of the scales and balancing and all the rest, they owe you big-time. Which is why you spend so many hours thinking about revenge and curses and flat tires for them. You’d like to get even.

But now pile on the double irony. When they’ve already hurt you once, and now they’re permitted to occupy your brain and steal from you maybe hours a day–and perhaps they get to do that for fifteen years–they’re ripping you off twice! For the original sin, and now again because they essentially own you. If a person owns your brain, they own you.

The late film critic Roger Ebert commented about a scene in “Jerry Maguire” where Renee Zellweger and Bonnie Hunt and a whole group of women were in a kind of twelve-step pro­gram. They would sit around and complain and dialogue and role-play about how terrible their ex-husbands had been to them. And there might be therapeutic value in some such dialogues, but Ebert mentioned in his review; “Someone should tell them that resentment is simply letting someone else occupy your mind rent-free.”

When you lose hours plotting and scheming and fantasizing about what that person did to you–and especially if your fantasizing and plotting is of the type which never fixes anything, which is generally the case–all you’re doing is permitting that person to spin your engine. They’ve essentially got their hands on the steering wheel of your life.

In the book “Pain and Pretending,” there’s an interesting twist on the New Testament teaching where Jesus told His followers how, if an enemy like those hated Roman soldiers commanded you to carry their pack for one mile, you should carry it for two. And for any person struggling with a Javert complex, a burning resentment, it sounds like the stupidest proposal in the world. Why in the world would you do that?

Ah, but notice. Ac­cording to Roman law, that soldier had a right to order any Jew to carry his load for a mile. And for that mile–man, he OWNED you. You were at his beck and call; he had the proverbial ring in your nose.

But now what happens if you voluntarily keep right on go­ing and carry his pack and his water bottle for a second mile? He can’t make you do that! And Buhler writes: “What Jesus was essentially saying was, ‘For the first mile, the soldier has you under his control; you are trapped. For the second mile, you are under your own control and are walking in complete freedom from the law. In other words, for the first mile he has you. But for the second mile, you have him. It is an act of power, respon­sibility, and choice, and the result is freedom.’”1

I don’t know how far we want to explore the metaphor of POWER through forgiveness. Although even the Bible teaches, in that famous chapter, Proverbs 24, that when you’re good to your enemies, you’re actually “heaping coals of fire on their heads.” But it is true that whenever we seek God for the purpose of moving our minds away from our hurts and away from our resentment, freedom is the promised result.

I remember an old anecdote, which I couldn’t track down regarding where it came from, though it reminds me of the late Dale Carnegie. But a certain person was maneuvering through heavy traffic, and everyone around him was driving like an idiot. People cut him off. People stalled their cars at red lights. Moron pedestrians dropped their grocery bags right in front of his car, etc. And a passenger in the front seat was about to have a coronary over it all. He was ready to pop a blood vessel. But the driver just calmly continued on his journey. When the apo­plectic passenger finally exploded: “How can you stand it? I’m going nuts!” the man driving said very quietly: “Why should I allow all these people to dictate how I live?” In other words, why should their behaviors and actions rule me?

Solomon observes that our re­sentments often swallow us up instead of the other person. “A man who digs a pit for others will end up falling in himself. A man who tries to roll a stone on someone ends up with the stone rolled over him” (26:27, The Clear Word).

The same principle is enunciated in the New Testament, where Jesus taught so powerfully about forgiveness and loving your enemy. In 1 Corinthians 7, Paul actually writes about sla­very . . . and this was real slavery! Men and women were inden­tured, sold for life because of their own poverty sometimes. And Paul basically says, “Don’t worry about it. If you’re a slave be content–although if you can buy your freedom, certainly, go for it.”

But then he tells his readers this: “If you accepted Jesus Christ as your Savior while you were a slave, the moment you did this, your spirit was set free! . . . Christ paid the price for each of you to be free. Don’t think of yourself as a slave” (vs. 22, 23, The Clear Word).

The Message paraphrase puts it this way: “Under your new Master [Jesus] you’re going to experience a marvelous freedom you would never have dreamed of.”

If the apostle Paul–and of course, Jesus was inspiring these wonderful words–wanted real slaves, slaves in chains, to feel free inside because the grace of Calvary was in their hearts, how much more should we feel free, be set free from our grudges about someone nicking our fender in the parking lot? The Bible tells us: You have Jesus! So you’re free! Don’t think of yourself as a slave, and certainly not as a mental slave to that certain someone. Jesus says it in these words: “So if the Son sets you free, you are free through and through.” “Ye shall be free indeed,” is how you might remember the King James.

You and I might have to tell our minds many, many times: “Move away from there! Move away from that swamp of sinful resentment! Jesus has rescued us from there!” And now we can add this extra motivation: We just plain and simple don’t want that particular person out there to own us any longer. Jesus owns us, not them! Our minds belong to Him, not them! In fact, in that 1 Corinthians chapter where Paul talks about us being free, even if we have chains, he then adds: “You’ll experi­ence a delightful ‘enslavement to God’ you would never have dreamed of.”

I think with real regret about hours and even days and weeks and months that I’ve lost to the enslavement of a grudge. I let someone else run my mind, occupy it, fill it up . . . and without giving me a dime’s worth of rent. And all for what? Malachy McCourt once observed: “Resentment is like taking poison and waiting for the other person to die.”

That is such a stinger! And the sobering, wonderful reality is that Jesus Christ wants to release us from that death sentence. “I want you to have freedom,” He tells us. “I want to give you rest, give you respite from that huge, poisonous burden of the grudge you bear.”

I'm a math professor at San Bernardino Valley College - awesome place! - and author of adult Christian fiction. Lisa and I have two grown daughters and four grandkids.
View all posts by David B. Smith →
This entry was posted in Jerry Maguire, Resentment, Uncategorized. Bookmark the permalink.