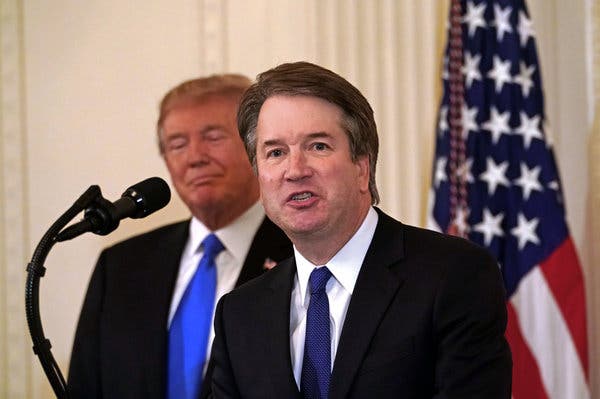 As a moderate Democrat, I read this book with mixed emotions. I will say up-front that the writing is really quite good, and the reporting impeccable. Other reviewers have noted that the authors’ conservative credentials have given them nearly unlimited access to a ton of sources, and that redounds to the benefit of the reader. It’s a herculean achievement and these two authors deserve a lot of credit for their work. It’s a good thing for all of us to understand and respect the process of nominating a Supreme Court justice, and I appreciate the education.

It’s also clear that these writers are fine people and citizens. They’re both devout Christian believers – as I am – and dedicated professionals and family women. All to the good.

Thirdly, it’s abundantly plain from their detailed reporting that Justice Kavanaugh has many sterling qualities. He’s kind, a hard-working man, a good father and husband, a believer. From the accounts of this book, he rises to the high court with a resolve to be fair, to not prejudge cases according to some Trump doctrine, and he says he respects the ideal of “stare decisis.” So that’s good. He shares a 93% similar voting record with Merrick Garland (don’t get me started), so that’s good too.

However, I will echo what some other reviewers are pointing out. There are definitely moments when the right-wing bias of the writers bleeds through the narrative. Republican senators are “just doing their job,” while Democrats are “hysterical,” “apocalyptic,” “shockingly vicious.” They breathlessly relate how Senator Kamela Harris unleashes a torrent of f-bombs while ignoring the reality that Republican senators are equally prone to use profanity. No one has been more rabid during the recent impeachment proceedings than Lindsey Graham, but in this book he’s portrayed as a model of sobriety and thoughtful reflection. As they report on CBF’s testimony, they allow that it’s likely some encounter actually did happen but that failing memory or other factors fuzzed the account. But by their final chapter, they predictably revert to the Republican talking points and label the same scenario as “scurrilous and unverified stories.”

The other blind spot, in my view, is how the authors decry how Kavanaugh was assailed by a mountain of unfounded rumors . . . and then proceed to fill several pages with exactly the same sort of loose attacks on Ford, based on nothing but hearsay and flamboyant guilt-by-association regarding Holton-Arms, the high school she attended.

Several senators shine through nicely in this story. Jeff Flake of Arizona, who essentially sacrificed his seat over his moral outrage over Donald Trump’s unfitness for office. Amy Klobuchar, who did a good job interviewing Kavanaugh and had to endure his one recorded lapse in judgment when he weirdly accused HER of having a drinking problem. And Susan Collins, who was genuinely conflicted about Kavanaugh and the preserving of Roe v. Wade and did a thorough job of due diligence before giving him her reluctant yes vote.

One more affirmation: the last 8% or so of this book is really, really good. It’s thoughtful, insightful, and analytical about what the Court needs. Just the last chapter alone makes this story an important contribution.

Here’s my third anxious observation, and I’ll point out that I finished reading this the same day I went to see “Bombshell,” the heartbreaking saga of how powerful men at Fox News sexually abused vulnerable women. One of these two writers works in that apparently sordid and corrupt place, so I’m confident she’s already taken this lesson to heart: SOMETIMES POWERFUL MEN ACTUALLY DO ASSAULT WOMEN  . . . and then determine to lie their way clear to the finish line. Deny deny deny come on let’s vote already. Cases in point: Donald Trump and Bill Clinton.

These writers are absolutely convinced that both Thomas and Kavanaugh were falsely accused. Perhaps so. Let’s hope so. But if shellshocked and battered women are telling the truth in 92% of all such cases, it’s more than troubling to wonder if there is perhaps a man sitting right now in that black robe who made a callous decision to prevaricate, while turning justice on its head by calling Anita Hill and Christine Blasey Ford the liars.