“Our Gang” and Finding Waldo

Lew, Dad’s agent, spread these fliers all around town to let Hollywood know his client was ready to work.

In Came the Brawn, Waldo agrees to throw a wrestling match for a good cause. Already Hollywood is corrupting his morals. 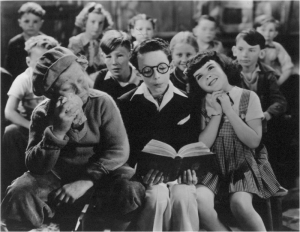 With a little help from Shakespeare, Dad finally steals Darla away from Alfalfa and Butch. Even “Woim” is overcome by the immortal bard’s words.

You can tell she’s crazy about him. Nerds of the world, triumph! 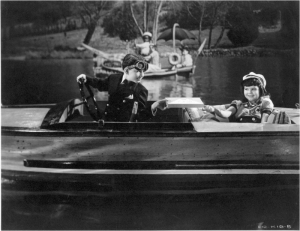 This was definitely Waldo’s best role! Three Men in a Tub is a clever 1938 short where Darla is in love with Dad and his power speed boat. Unfortunately, at the end of the Toluca Lake Championship Race, the fickle Miss Hood returns to the arms of Alfalfa.

Waldo’s Lemonade Stand was the final film in Dad’s storied Our Gang career, which ended in 1940 over at MGM. I’m sorry to admit that this last episode is somewhat of a stinker. Siskel and Ebert didn’t like it much at all. Notice Robert Blake, later the star of Baretta, standing next to Buckwheat.

After leaving the “Little Rascals,” Darwood Kaye really just had this one good film role, playing the part of “Killer” in the musical Best Foot Forward.

Dad’s parents were eternally proud of this publicity shot with Lucille Ball! But for some reason, the glamorous redhead preferred an obscure Cuban band leader named Desi Arnaz.