It’s a matter of survival for student missionaries to LOOK BOTH WAYS before crossing a street! Traffic hurtles at you from the wrong side – and during an overseas school term, this is a metaphor for life itself. The unexpected is pretty much gonna happen.

Katrina Saxby wasn’t even planning to trade her on-track academic life at Pacific Union College for a year in northern Thailand. But the call of God was clear and so she said yes. Now she’s got to teach English, start up a high school choir, launch the newsletter, be a substitute preacher when a bus breaks down, dispense dating advice to teenage girls, and fret about the growing reality that one of the Thai teachers might be falling in love with her.

I blush to tell you that this brand new mission adventure is based on a bloodstained summer afternoon that landed ON MY JAW in 1973! I was visiting Mom and Dad, scored a gig teaching 6th grade (I was barely 18 myself!) and thoroughly enjoying myself in the Ekamai classroom. And then . . . well, I’ll let you read for yourself. 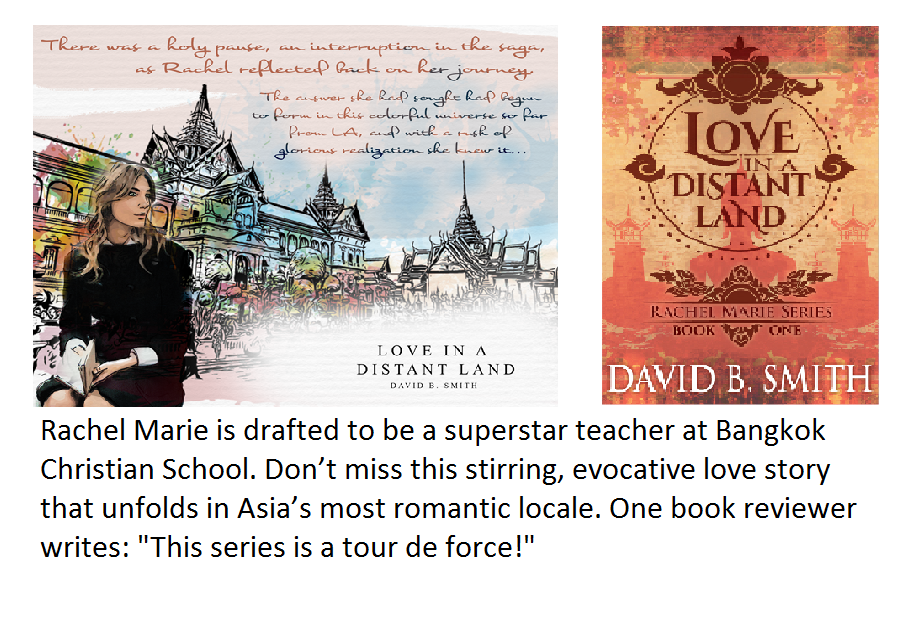 I spent an amazing childhood in Thailand, and enjoy reliving that experience by writing inspirational love stories in that tropical setting! The series is ten books – and sequential in plot development – but you can read them in any order. Download prices are set as low as possible so you can do an extended tour for only a few baht.

These stories are overtly Christian adventures that do contain mature themes and moments of temptation and conflict. Brief synopses are just below, and I promise you’ll get a blessing from your reading experience.

And what a nice thrill to hear this Bangkok love story come to life with a recording pro like Tonya Foster Yancey at the mike! My new friend and partner worked all this Spring to get the audiobook just right, and I’m so proud of her. If you subscribe to audible.com, please consider making this your free pick of the month and take “Love in a Distant Land” with you to the beach or to ease your freeway commute.

Here’s your link to the audiobook! 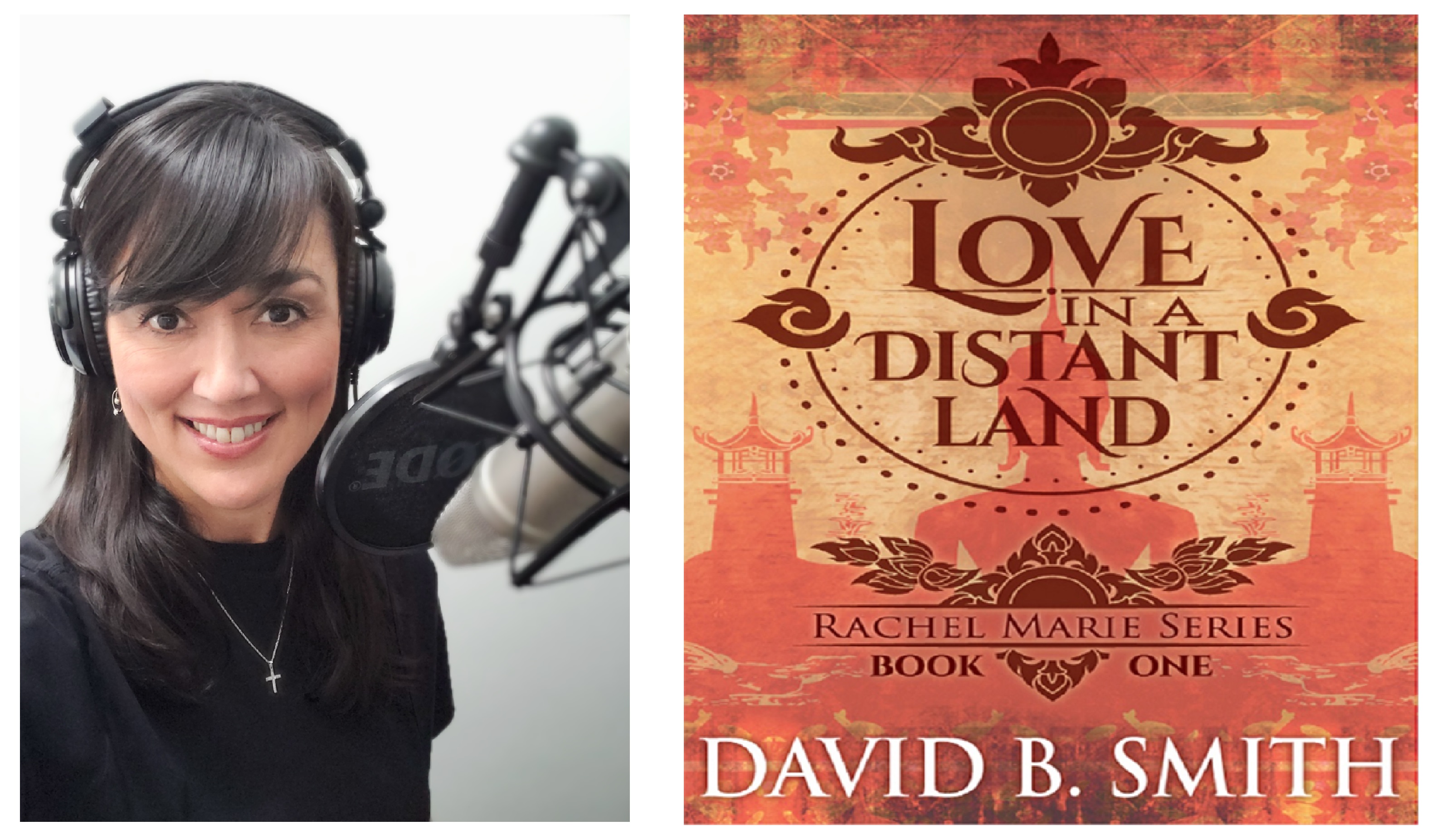 #1 Love in a Distant Land

After a busted romance, Rachel Marie escapes to a one-year stint at Bangkok Christian School, where everyone hopes she can model being a superstar teacher. Love soon begins to percolate with Khemkaeng, BCS’s vice principal, who is thoughtful, gracious, good-looking . . . and a nominal Buddhist.

Samantha Kidd arrives at BCS divorced, bitter, and with a 7-year-old child in tow. Before long she’s helplessly in love with the school’s joke-loving music teacher, Tommy Daggett. But her flashes of rage are still an issue, and she has yet to make a decision about Jesus. This story has a gripping subplot dealing with Thailand’s infamous sex trade.

#3 All the Winning Numbers

She’s 55 years old and has had exactly zero dates since a one-kiss high school fling many decades ago. On the brighter side, Sue Baines is a whiz organizer and a dynamic substitute principal at Bangkok Christian School. She might actually savor falling in love with a hulking, tender Aussie physician except for one thing: Miles’ son Gino is a hostile and disrespectful teen who hates both his father and his father’s new lady friend.

All through the first three books, Benjie Cey is invariably the motley sidekick with toothpaste spatters on his necktie. All at once he’s got what Thai kids call a “fan.” Chloe Cey is forced to attend university at Bangkok because of her father’s new gig at the British Embassy. She’s a volleyball superstar with matinee good looks. Is this a likely romantic pairing? This riveting story has terrorist bomb scares and finishes with a thrilling saga of forgiveness.

A random act of horror shreds Audrey’s marriage and threatens her faith as well. But medical healing is more laid-back and affordable clear around the world in the bargain-rich Land of Smiles. Soon Miss Giske finds herself teaching sixth grade right next to Rachel Marie among the colorful BCS dream team that knows how to rebuild broken hearts. Pieter Jooste, renowned cardiac surgeon at Saint Catherine Hospital, becomes her platonic friend and tennis therapy partner. Despite his gracious overtures, Audrey, still emotionally numb from the accident, isn’t ready to love again. But she admits to being romantically intrigued by Charles, a colorful professor at nearby Redeemer College.

#6 Accompanied By a Miracle

It takes some adept multitasking for Ratana to thrive as a third-year med student who also does church concerts throughout Bangkok. Then one more thing threatens to explode her frantic schedule at Chulalongkorn U. His name is Jaidee: a heart-melting two-year-old orphan who needs a new mommy. Studio sessions and concert gigs help her and Dad pay for a mountain of diapers and Sky Train commutes to arduous clinical sessions at Saint Catherine Hospital. Then a long-haired musical whiz from California shows up, eager to produce Thailand’s own version of Music Power . . . and Maw Ratana Kasemsarn is high on everyone’s list of possible superstars. Can Noah Charoenkul mentor Bangkok’s favorite doctor wannabe to the final round? As the drama unfolds, Channel Twelve’s TV cameras seem to also be picking up a percolating love story.

Nattaporn has a new teaching credential in hand, but also an abrupt break-up letter to absorb. She’s embarrassed but grateful by her brother Khemkaeng’s graduation gift: the offer of a gig at Bangkok Christian School. Even after a fainting spell on her first day puts her in the hospital, it looks like God’s providence when amateur chaplain Gino Carington pays her a visit. Natty’s third-grade girls are giddy over their teacher having an awesomely cute new fan. But she knows her cultural Buddhist upbringing is on a romantic collision course; week by week she ponders her boyfriend’s sermons and accompanies him to pizza Bible studies. Book #7 is a harrowing romantic thriller, shared in a first-person narrative by BCS’s newest heroine.

#8 Lost in the True Church

Heidi Richardson sees the levers of power up close; as staffer to a U.S. Senator, she accompanies her boss on a trade mission to her childhood home of Bangkok. Her angst at traveling overseas while five months pregnant is heightened by the reality that her marriage has just gone on the rocks. Then little Claire shows up way, way early, and the fragile preemie treasure is tethered to the NICU along with Mom. Heidi’s long-dormant faith begins to recover, especially as she begins to fall in love with a devout Georgia native working at Mission Hospital. Their friendship is threatened, though, by his entanglement with a dangerous cult group infecting Bangkok’s faith community with its accusations and violent rhetoric.

Is a decade enough time to heal the jagged soul scars of Pattaya Beach? Pranom was just 13 when a greedy uncle forced her into Thailand’s infamous sex trade (And a Happy New You). Now a college graduate secure in the love of her adopted Portland family, she might actually dare to spend a year back at Bangkok Christian School as the new calculus teacher. Back in Asia, the kids are great. Her new church is great. Auntie Rachel and Uncle Khemkaeng are great. But there’s a new boyfriend Pranom’s not too sure about. All the risqué go-go bars are still going at full blast. And nobody knows where Uncle Viroj might be . . . Oceans of Grace is a powerful concluding thriller about boundaries and Calvary forgiveness. 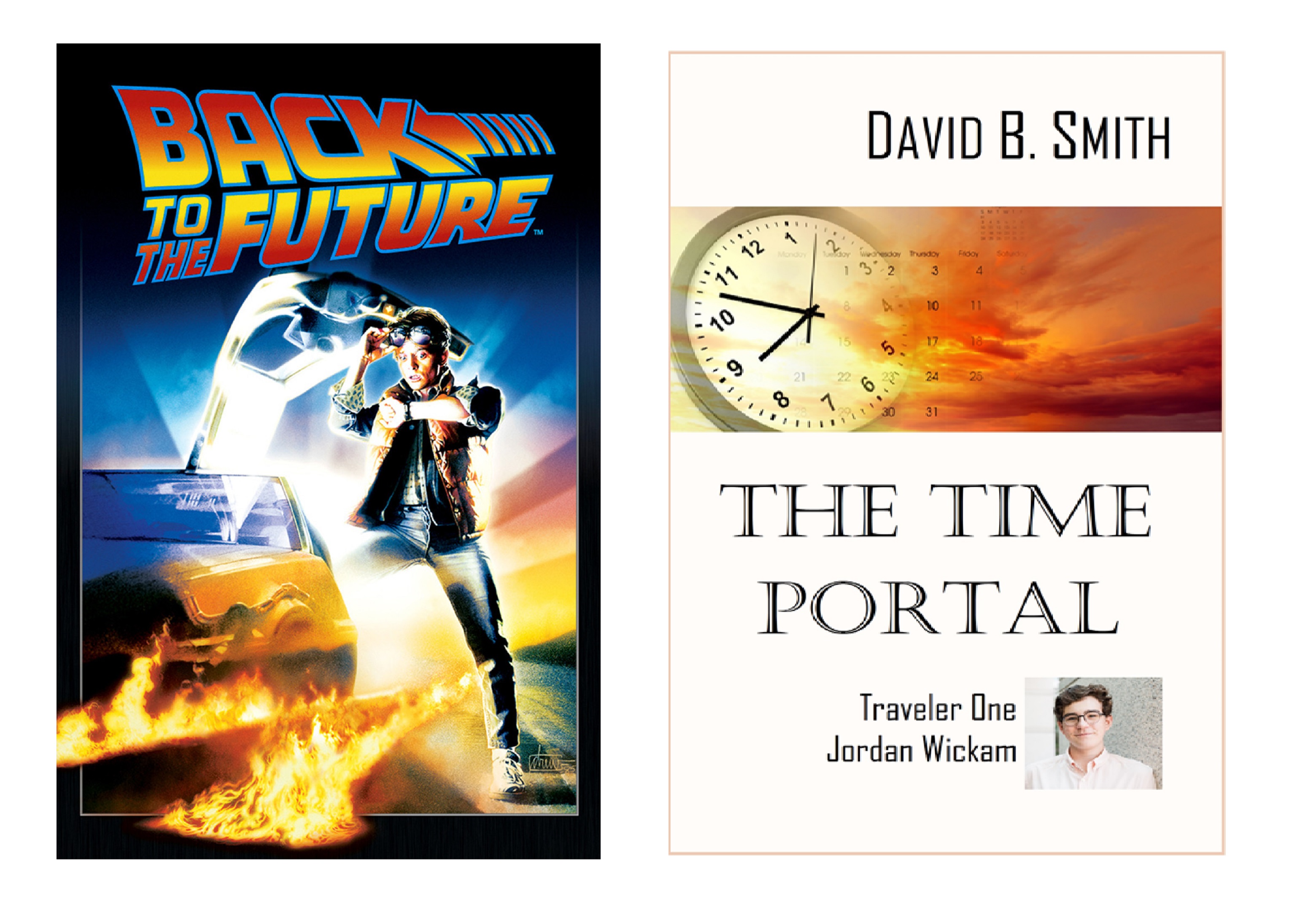 I’ve been dreaming about this project for years . . . and it’s here! If you’re intrigued by sci-fi drama, especially time-travel stories, then we’ve got a triple adventure waiting for you. Please do click on the TIME PORTAL link and read all about Jordan Wickam’s blast to the past.

The Time Portal I

Kids are back in school and teachers want them to shut off cell phones and READ!!  Bucky Stone books are awesome character-building stories.

All ten volumes in the Bucky Stone saga have just been re-released in print format! These are fun, Christ-centered stories, filled with sports action and sizzling high school romance. They make the perfect birthday gift or holiday stocking stuffer. And yes, they’re available as e-books as well. Each adventure is priced at Amazon’s minimum of $4.95, so your kids can indulge in the whole saga.

“To have a boy want to sit and read book after book in a wholesome series is wonderful. My son loved this whole series and highly recommends it!!!” – Kristen, May 2012

Check out these new essays on the pillars of Christianity!